Sometimes it’s the smallest spaces in our homes that work the hardest—and this bathroom was no exception! When I first saw this tiny bathroom, it was apparent that it had not been updated in quite some time...mustard yellow counter tops were paired with a mustard vanity and patterned tiles in a matching hue--even the ceiling wasn't overlooked! Certainly not the color I’d want to look at every day--and neither did this homeowner!After 10 years, she was ready for a change--REALLY ready! The glass doors were very dated and to make matters worse, this corner of the house was always freezing because of cold winds from the nearby Lake and no insulation whatsoever. This tiny room needed a major overhaul! 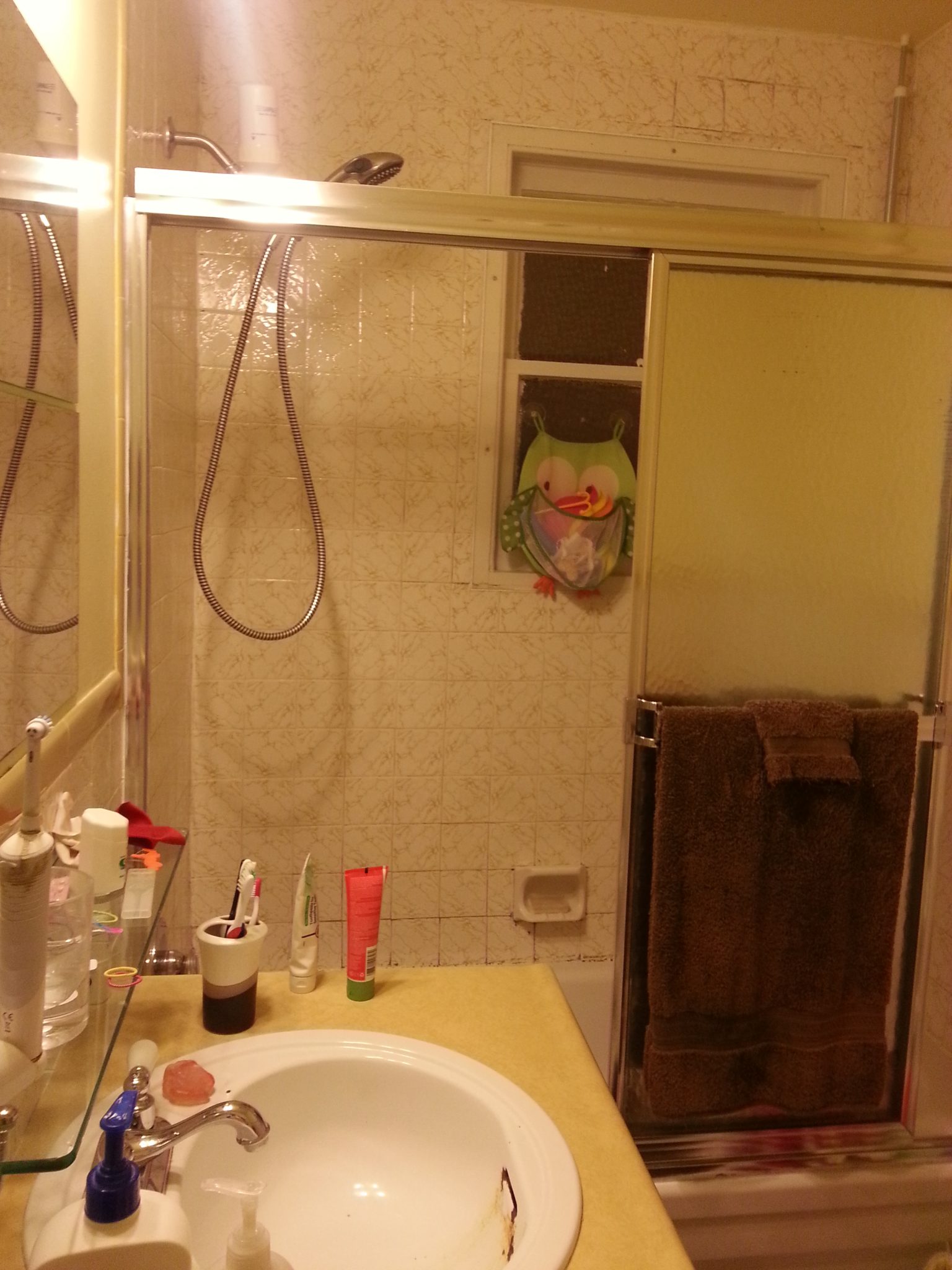 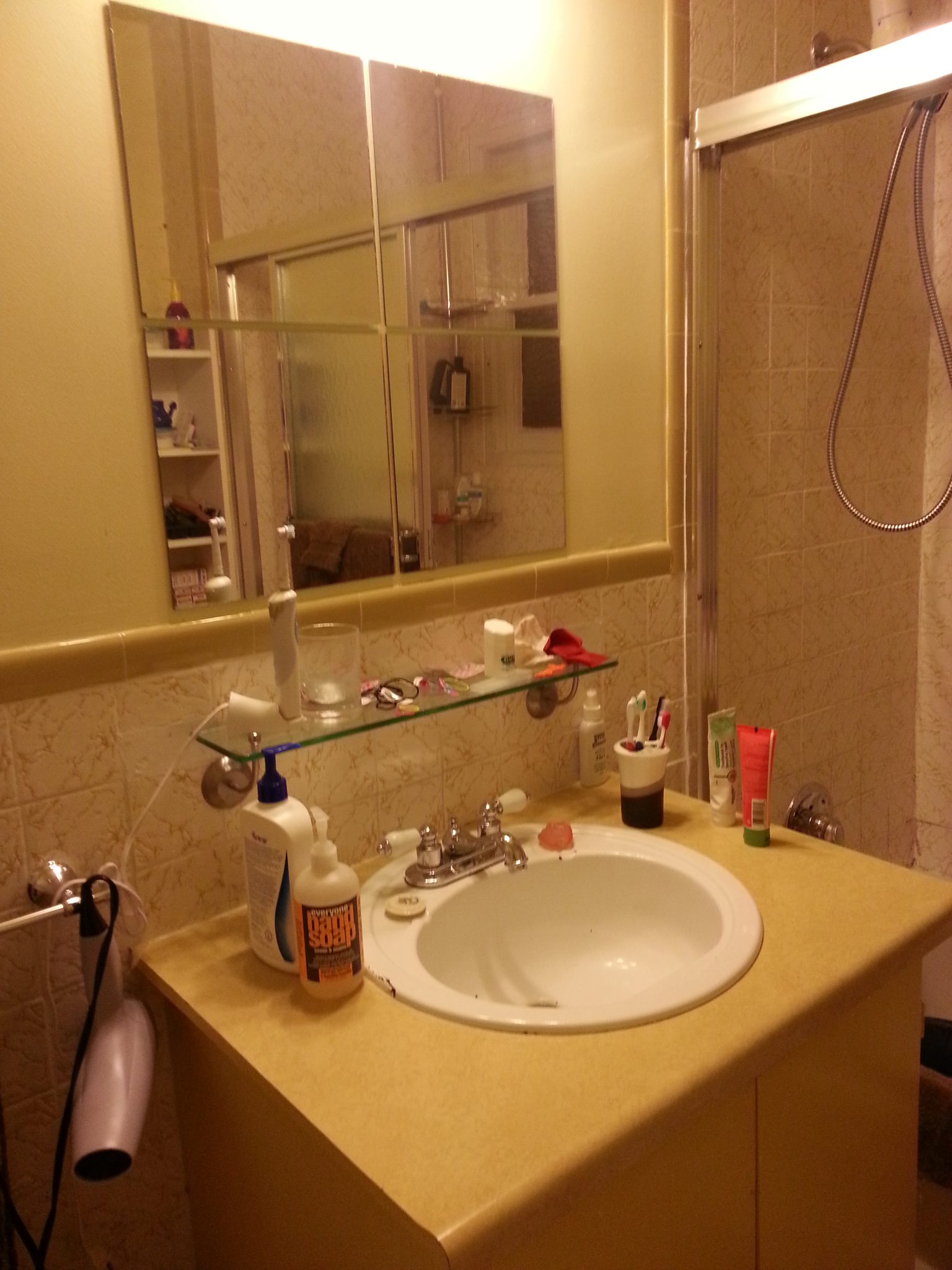 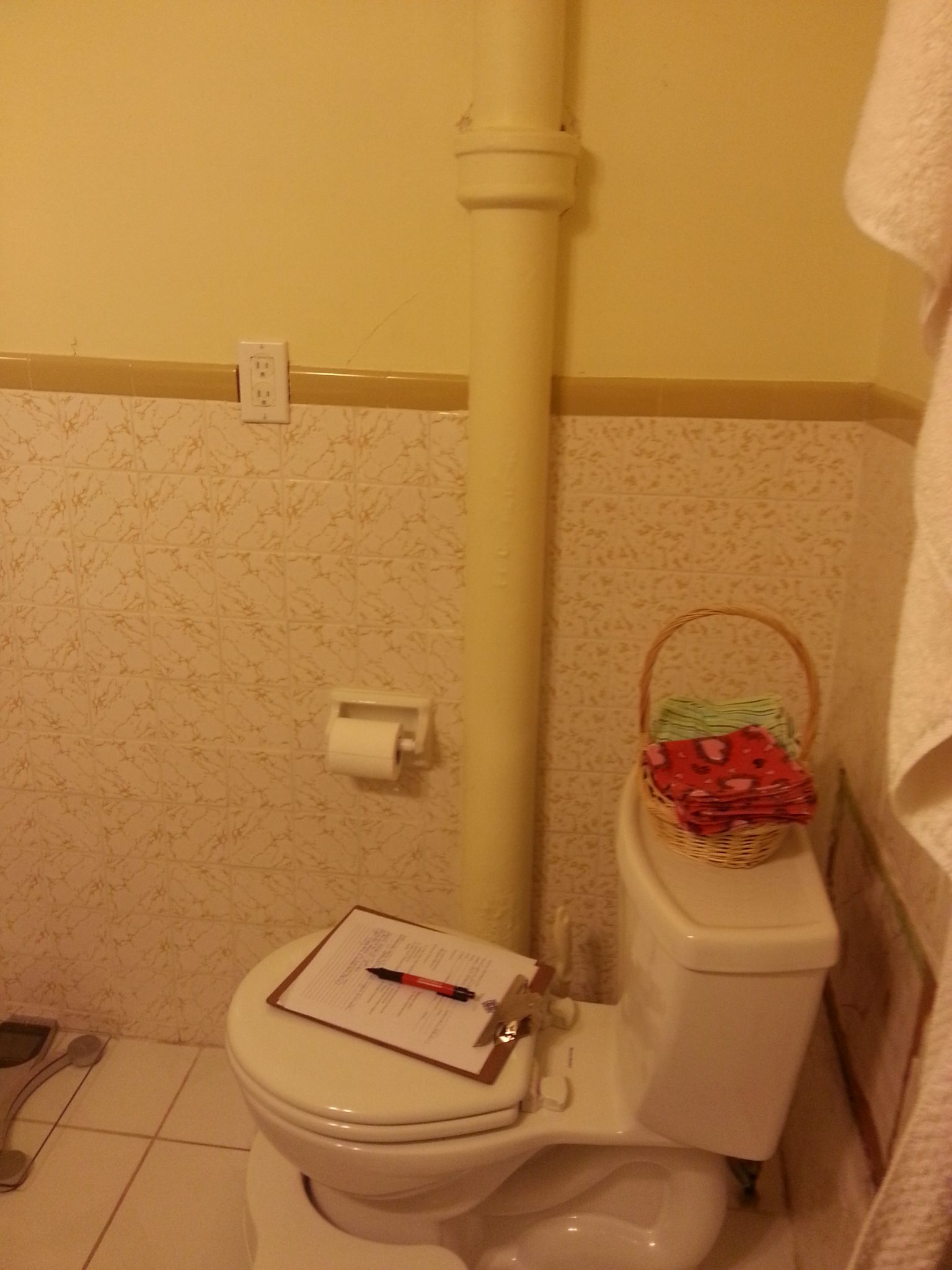 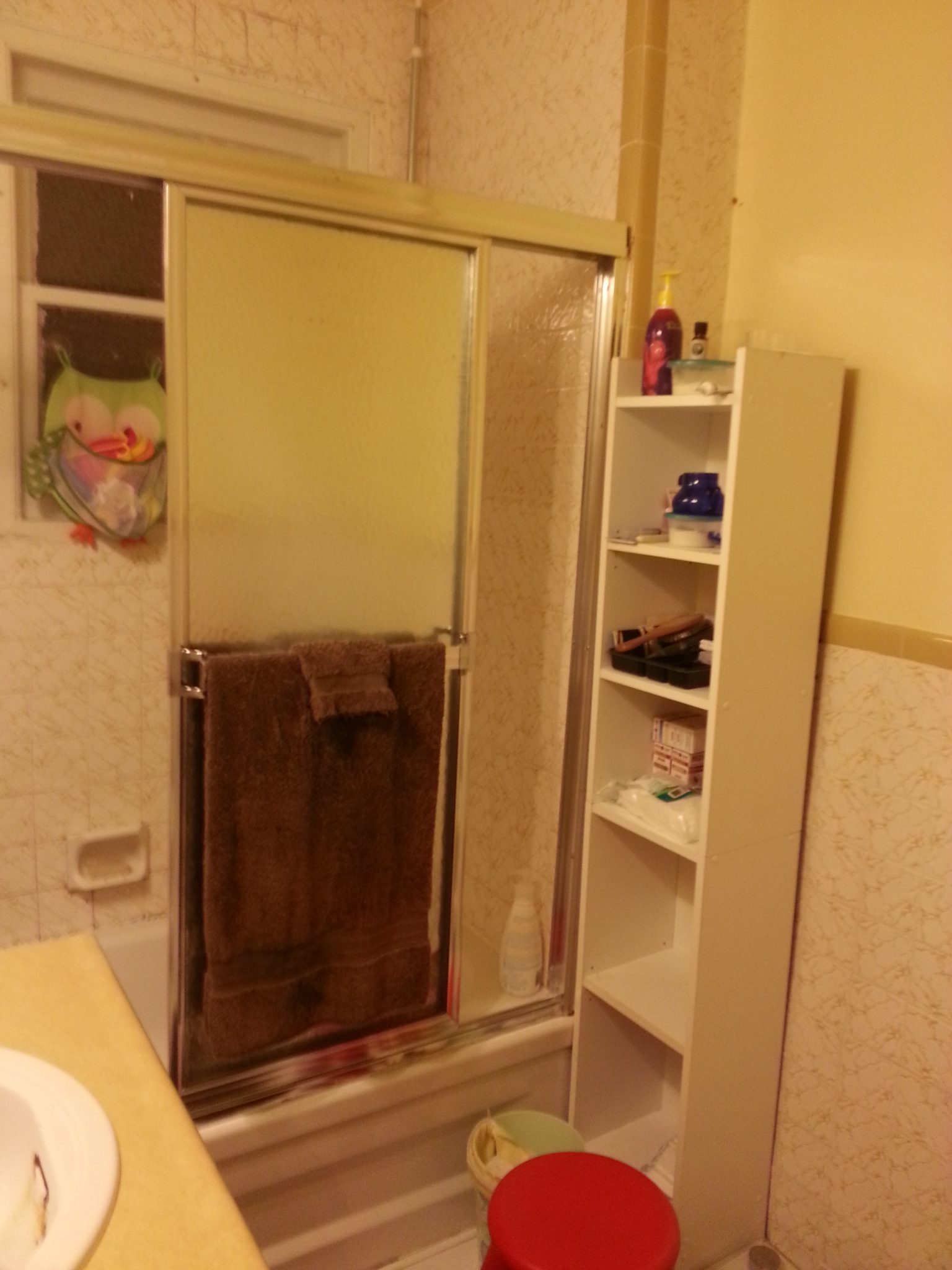 To start things off, we ripped out everything right to the studs, and added in new insulation; we also replaced the window giving this room a significantly higher R-factor and more natural light. The only thing we really kept from the original room was the toilet! From there, the room was put back together, with each finish and fixture given careful consideration. Many of the fixtures and tiles purchased were from big box stores to maximize the budget and get the most for our dollar. A new soaker tub was installed, giving the homeowner the luxury of a relaxing bath at the end of a long day (one of her favorite little luxuries). Niches were added to the tub surround to provide a spot to store necessities rather than cluttering things up with metal shelving. 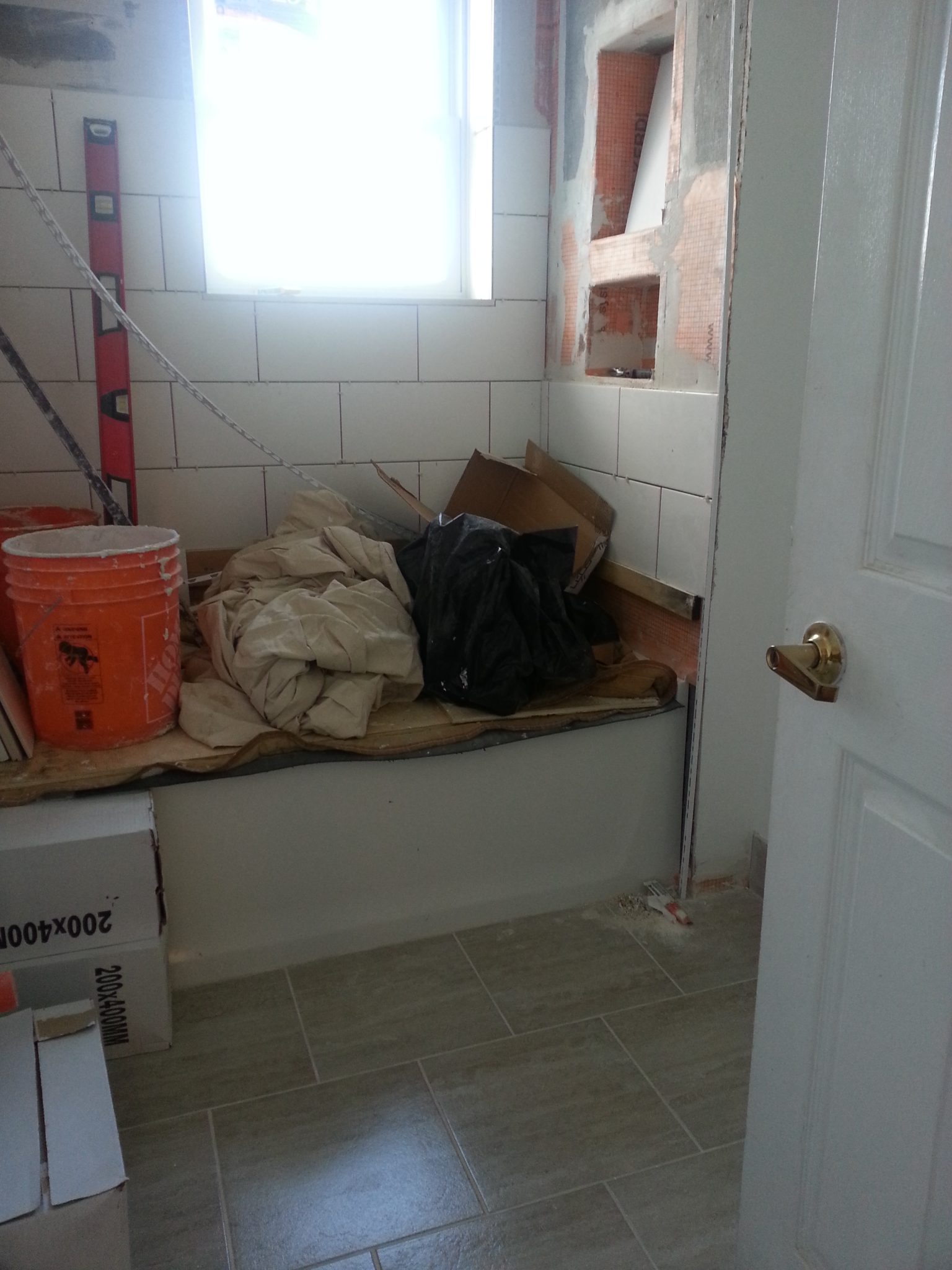 We wanted to visually expand the space as much as possible, so we kept the wall tiles white and accented in soft neutral tones for the flooring and counter top. Providing minimal contrast can make small rooms like this seem much larger! An oversized subway tile was used in the tub area with an accent tile border to add interest and subtle color. Using a larger tile minimized the fussy look of grout lines and kept the look really clean and fresh.

The lack of storage was a big issue in this bathroom, so we chose the largest size vanity we could feasibly fit in the space and installed a medicine cabinet to remove clutter from the counter’s surface; the same accent tile in the bath was used here in the back splash as well. A soft green palette was chosen to bring in an element of nature, and is carried through in the paint color, the striped shower curtain and even the artwork. The client debated on whether or not to install glass doors, but in the end decided that a shower curtain was better suited to their needs and also added a touch of softness to all the hard surfaces found in a bathroom. The striped curtain chosen added a subtle color  and makes such a difference—it really pulled the whole space together!

To finish things off, new lighting was also added enhancing the chrome used throughout the room in all the other fixtures. The transformation of this tiny bathroom is incredible and now this much brighter space is where the homeowner loves to start—and end—her day. 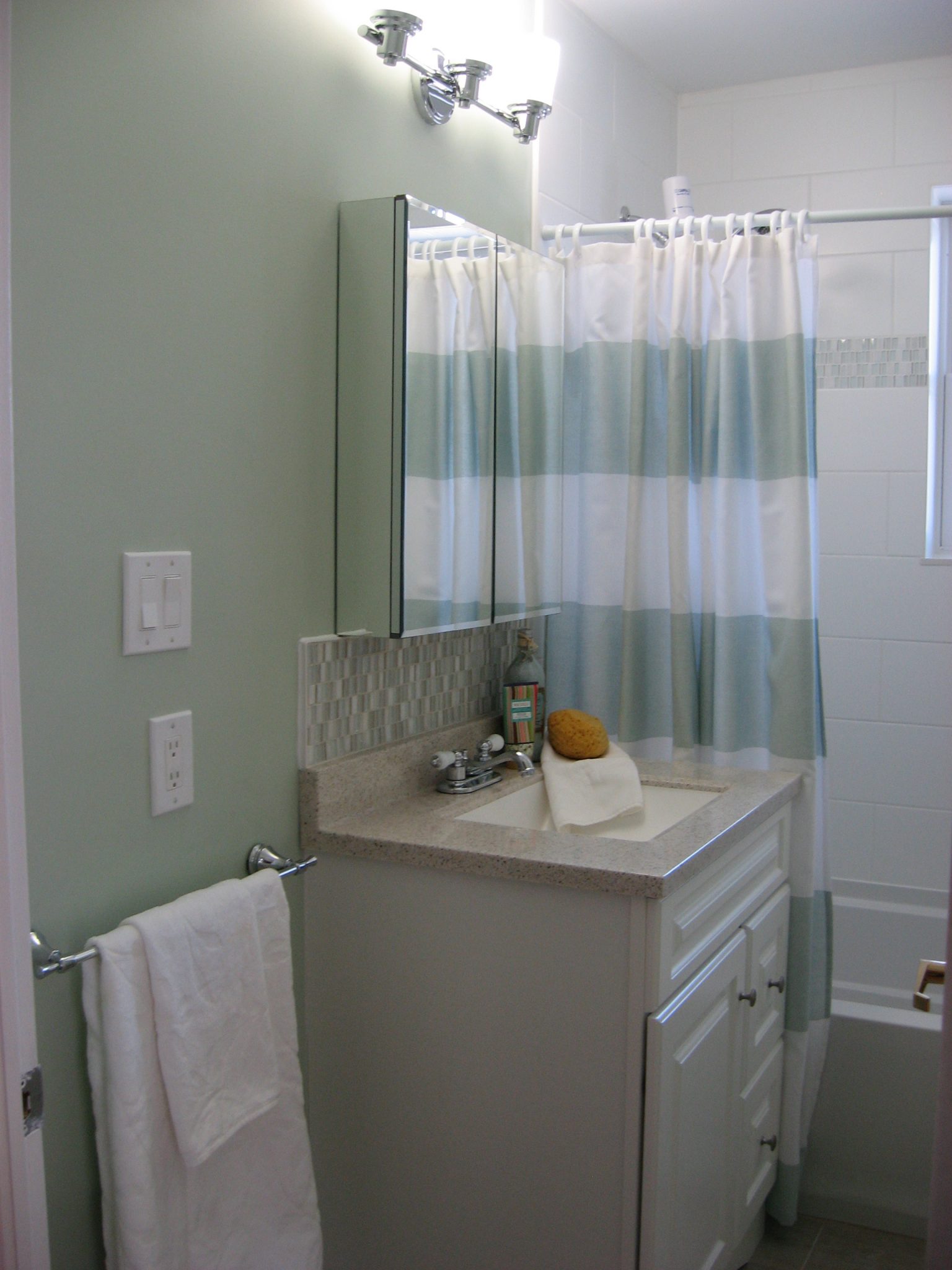 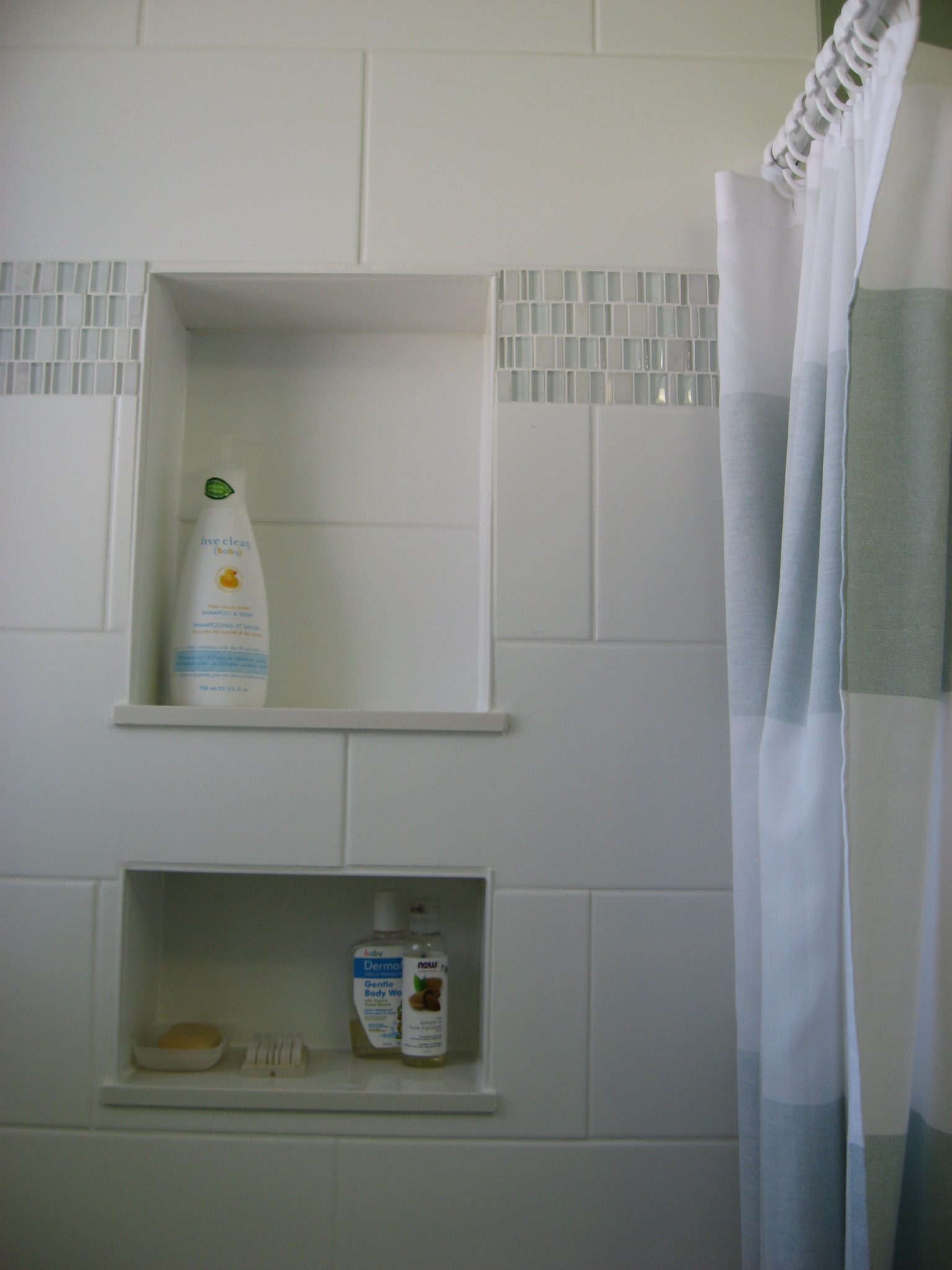 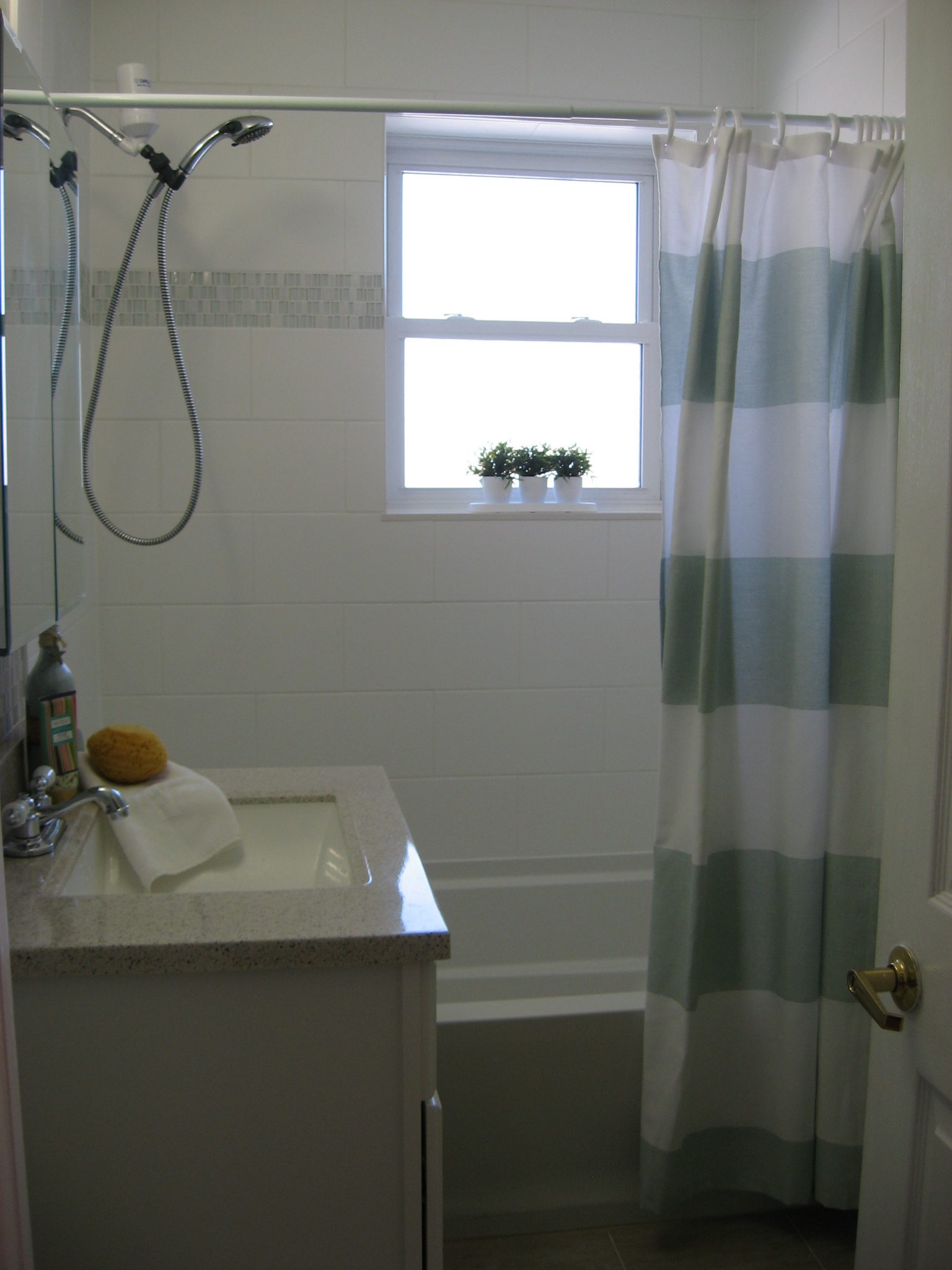 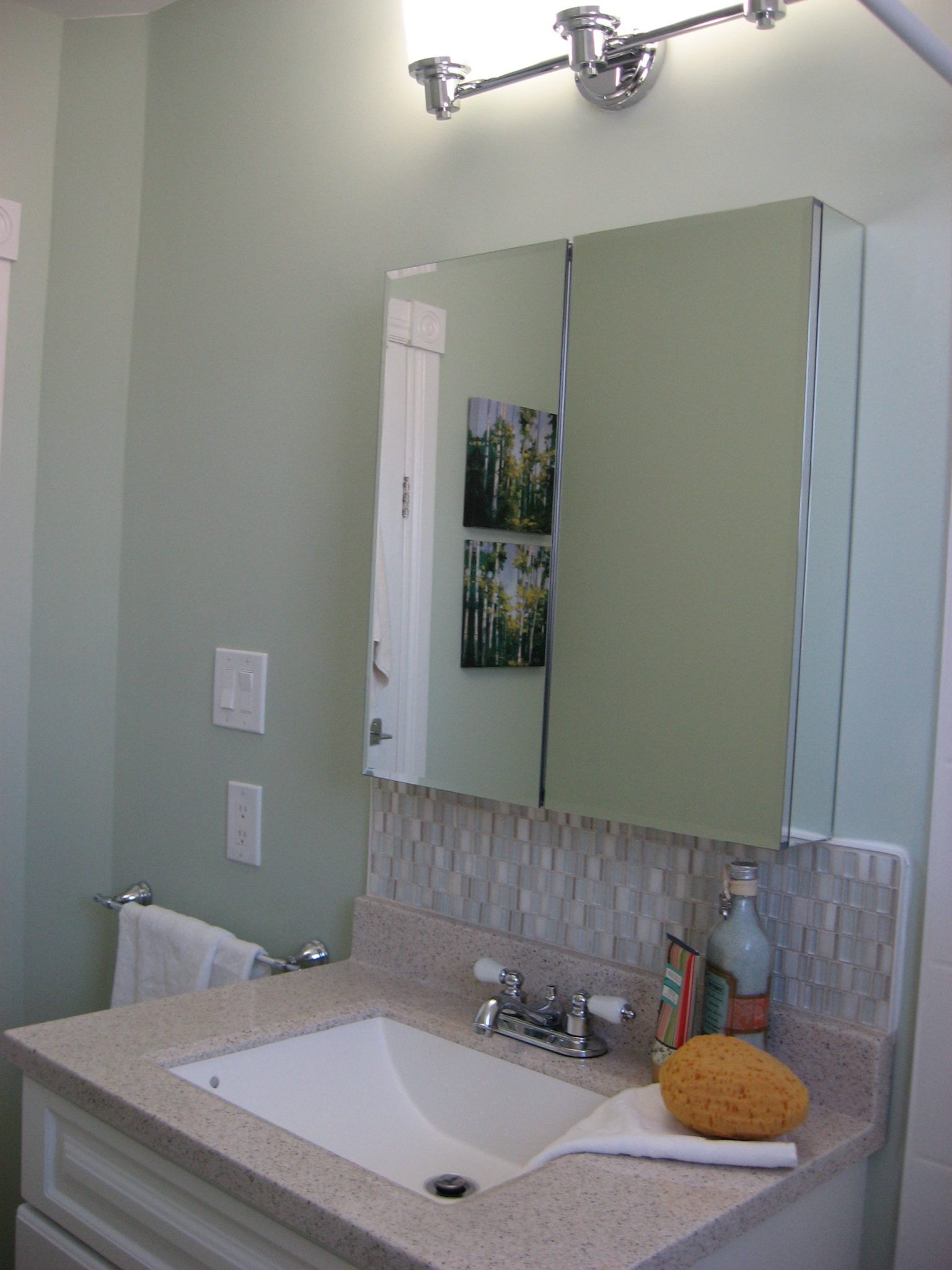 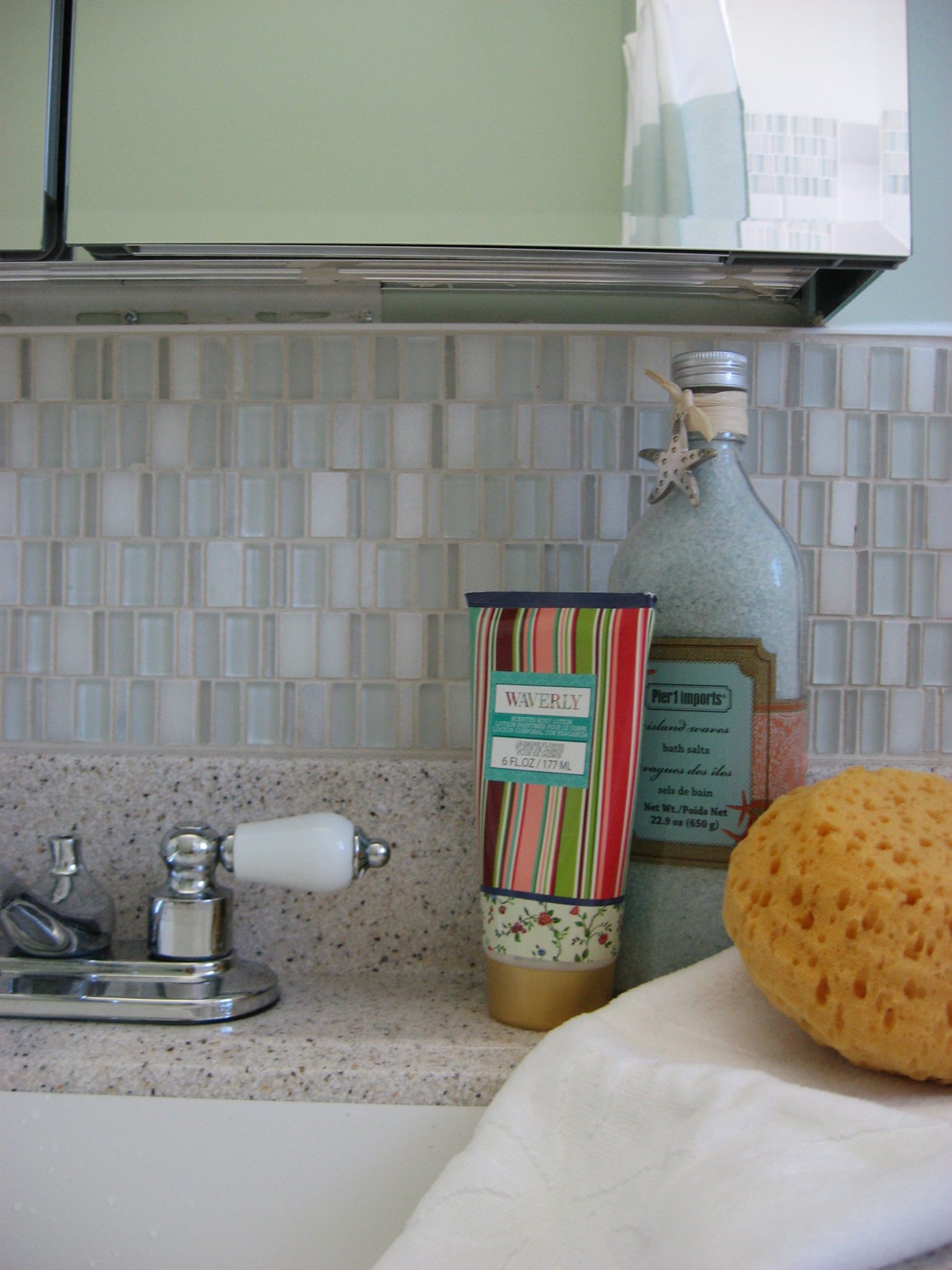 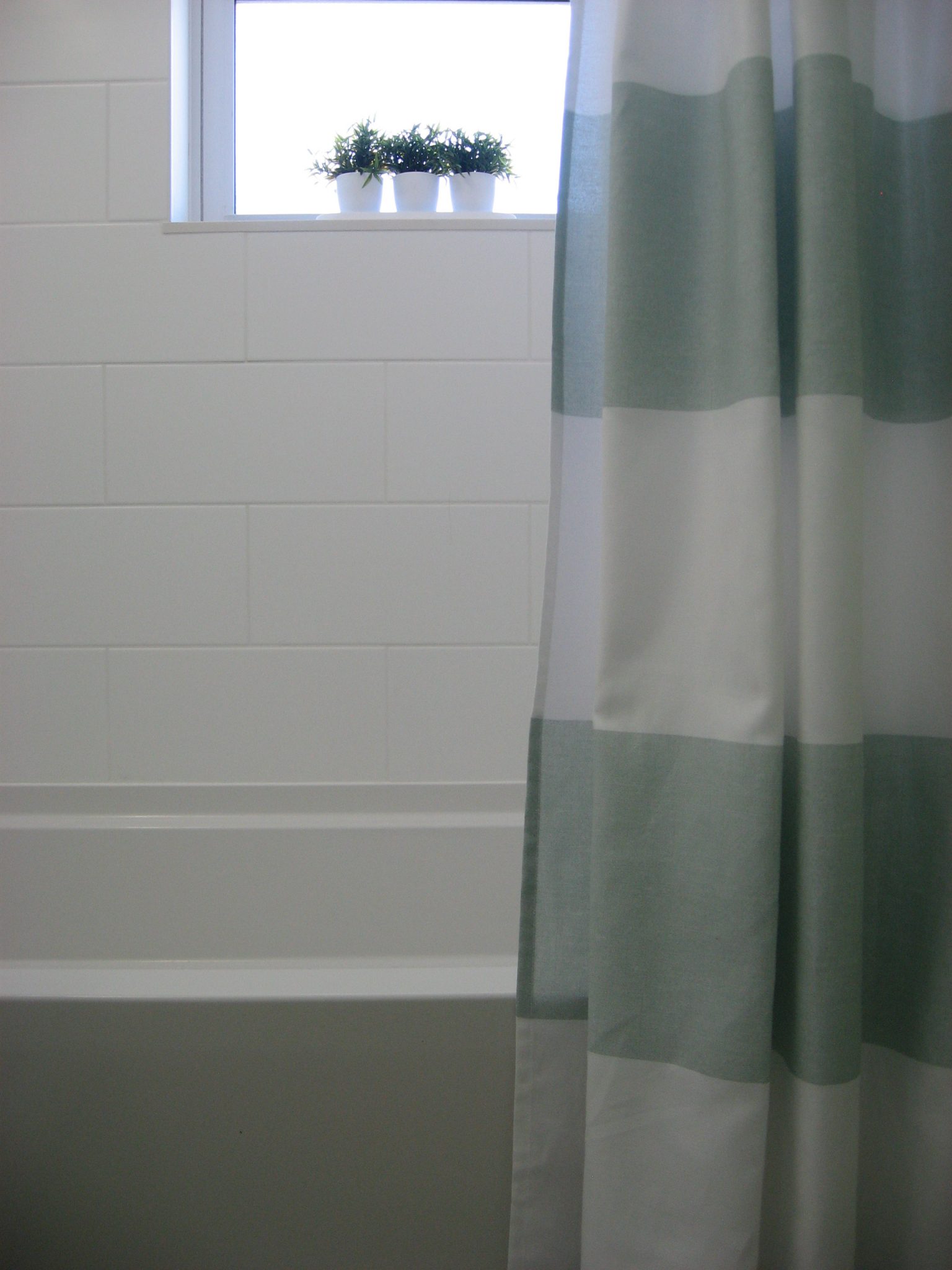 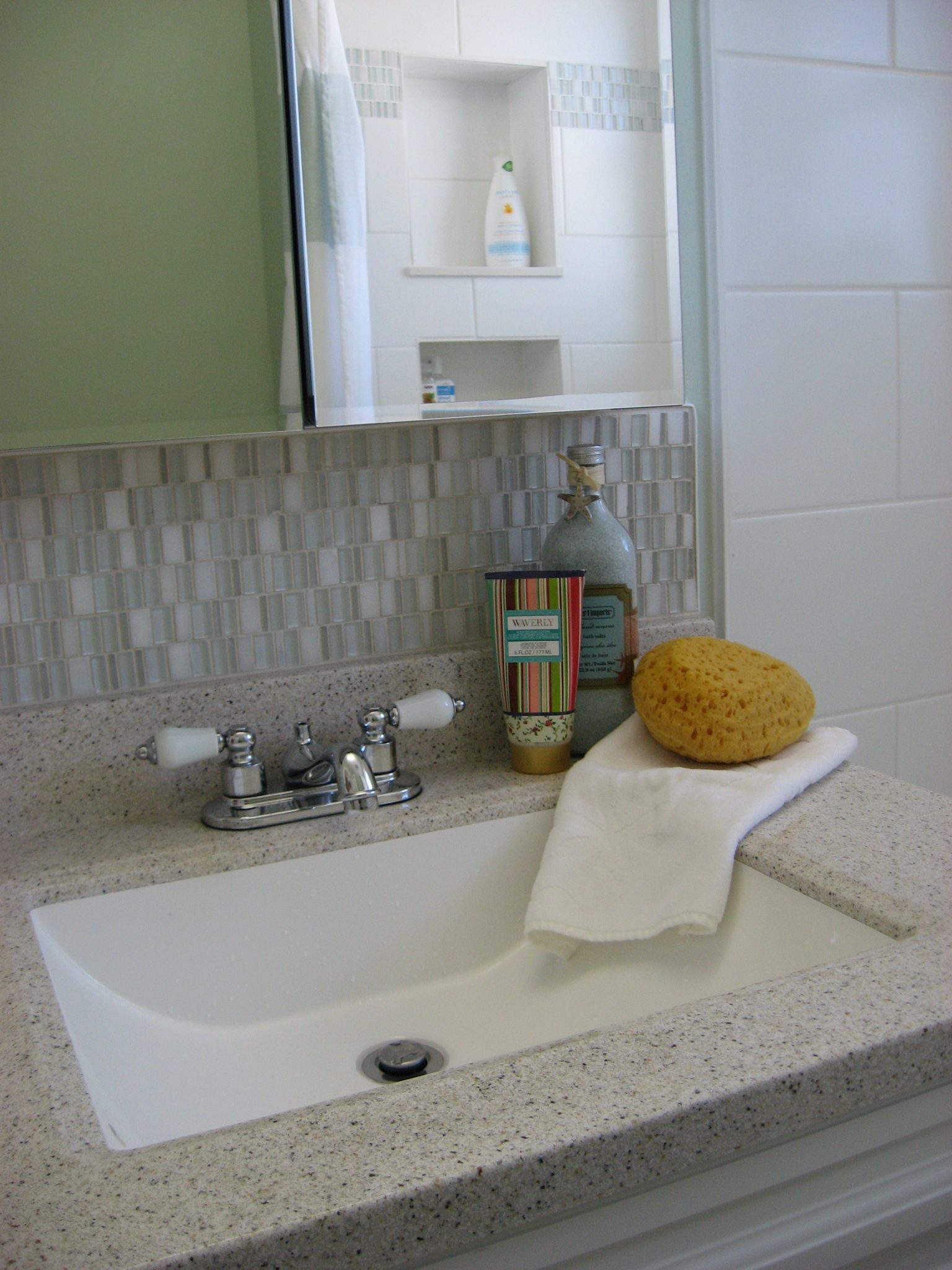 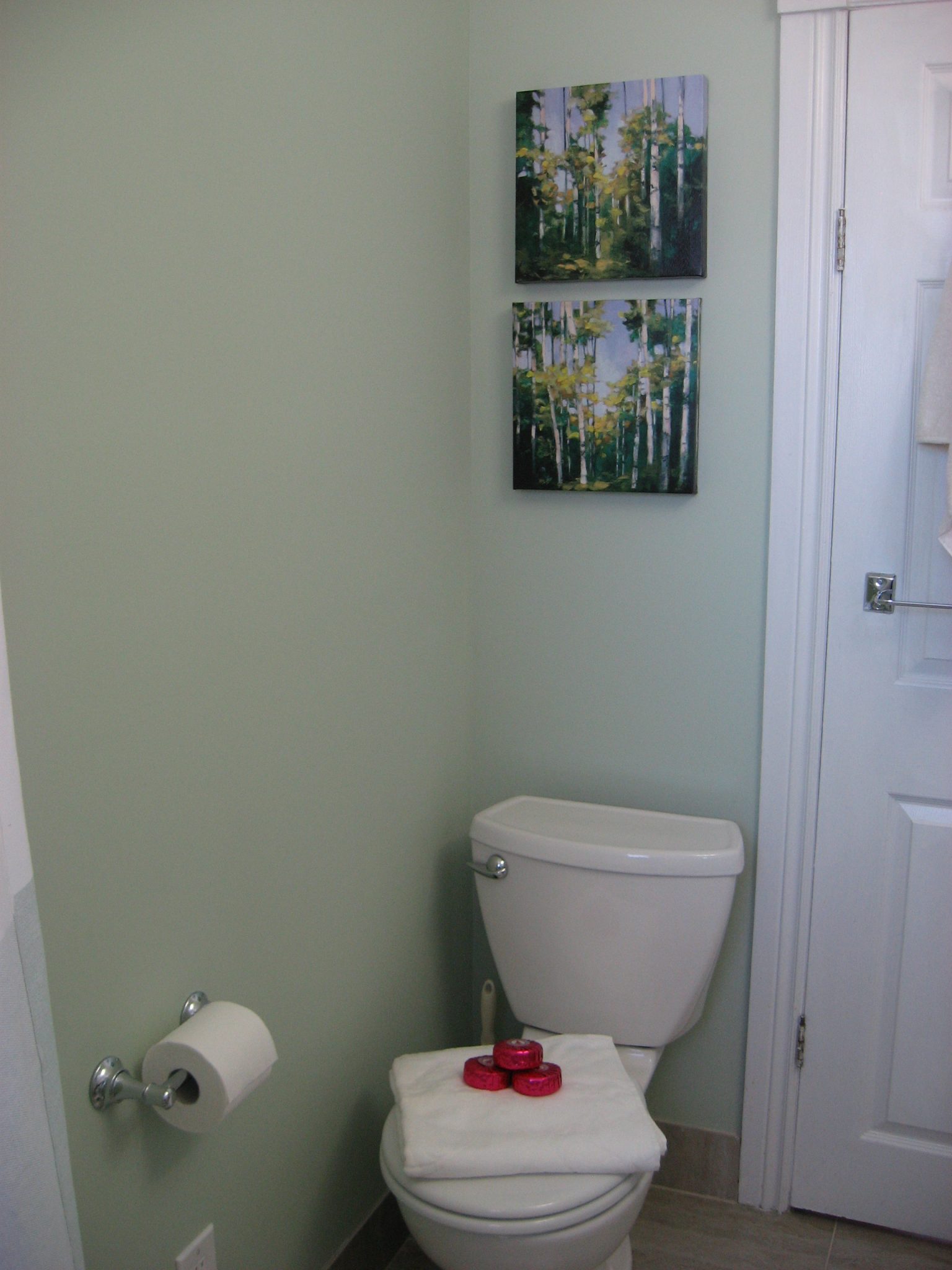